Read the interview Director Dale Hayes and Actor Helena Levitt did with Heather Solomon from The Canadian Jewish News http://pages.cdn.pagesuite.com/9/8/982e2d7e-47e4-4d1f-99ea-380f19413254/page.pdf

Read what one of our audience members wrote:
Dear folks at d² productions,

I wanted to give you feedback about the play Late Company (written by Jordan Tannahill, directed by Dale Hayes), that I saw on November 16th 2017. Simply put, I loved every aspect of this play and was so impressed by the caliber of the acting, the writing, direction, set, all of it! I found it to be extremely poignant, relevant, and well-balanced in how the topics of homosexuality, suicide, family dynamics were treated. The personal and social implications of these important issues were treated in a sensitive, honest and courageous manner. The use of humor eased the weight of the suffering without detracting from its emotional intensity. If anything it added to it. My feedback is informed by both my personal as well as my professional experience; I am in a same sex relationship, I am.a parent, and I have been working in the field of mental health with youth, adults and families for many years now.
I am delighted to have seen this play; it was not only a work of art, it serves a vital political, social, and educational function in the thoughtful, well-informed, and emotionally honest way in which it deals with topics that can often elicit fear, denial, rejection, judgement, confusion and many other feelings for many. This is the second play which I have seen that was directed by Dale Hayes ( the first one I saw was Sins of the Mother), and I am so very impressed! Lastly, I must say that I would very much like to see this play also find its way to the more mainsteam theaters such as the Segal Center and/or the Centaur.-Thank You
Angela-Ruth Idelson 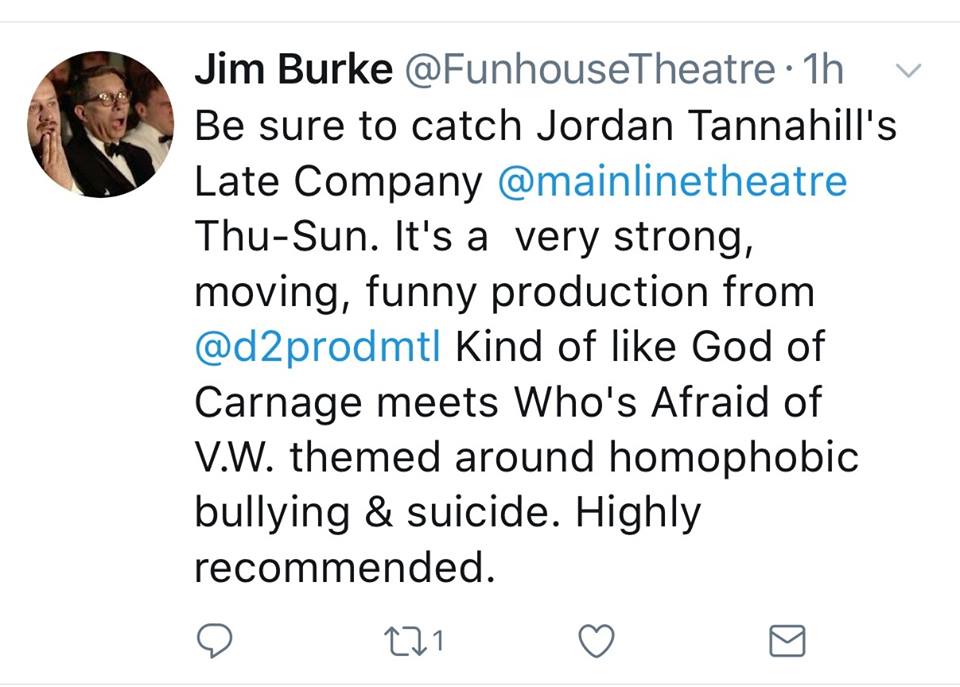 Late Company produced by d² productions is “The Best Montreal Theatre of 2017” according to Jim Burke of the Montreal Gazette. Read the article here: http://montrealgazette.com/entertainment/theatre/best-montreal-theatre-of-2017-madcap-cops-to-mirthful-mormons