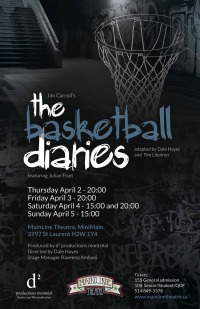 This one person show, featuring Julian Fiset, is an adaptation of poet and memoirist Jim Carroll’s juvenile diaries chronicling his kaleidoscopic free-fall into the harrowing world of drug addiction. Adapted for the stage by Dale Hayes and Tim Liboiron

Audience response:
“What an awesome play! Touching, truthful, raw, sometimes funny, often sad. This play should tour the schools. Thanks Dale and d2. Julian is a massive talent and so are you.” – Christine D April 2 2015

“Hardcore topic with gutsy performance & the play affected me emotionally, as a good play is meant to do. Thank you for sharing this powerful story. As I drove home, I realized I was not alone, as melancholy moved within.” -Leigh Ann April 2 2015

“Congrats again to you and Julien. Job well done. You’re a rockstar Dale for allowing this story to come to life” -Patrizio S April 3 2015

“I was able to attend the opening night of this play and let me tell you I was not disappointed! It seemed as though Mr. Fiset drew from life’s own dirty brown sludge to deliver a hit straight to The Main and as page after page of Carroll’s Diaries were flung open, there was little one could do but sit and stare…all the while reminded of the fact, that although very few of us ever experience life at these extremes, the loneliest number is and always will be the number 1!” – Randall M April 2 2015

“Have just watched “The Basketball Diaries”. A solo performance by Julian Fiset, directed by my friend Dale Hayes. Needless to say,Dale’s realistic direction is simple but poignant, intense and stimulating. The character, who might be somewhat overacted, is otherwise approached with careful and incisive minimalism by Fiset. It has been a real treat! Congratulations to both! Congratulations to all involved!!!” Fabio April 3 2015

“By 20 minutes in, I was completely enthralled by the character and world delivered by The Basketball Diaries. It is a dark and real exploration of drug addiction in young street kids.” Allie W April 4 2015